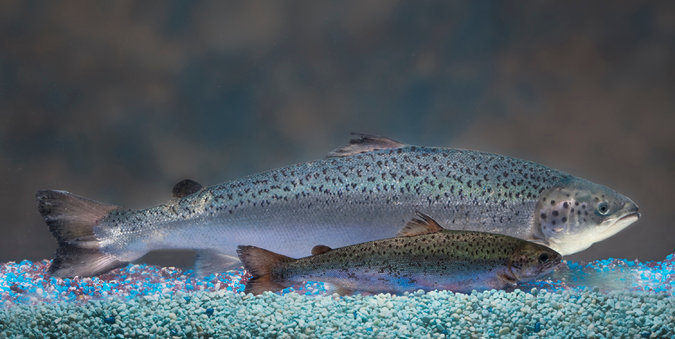 The FDA has officially broken new territory in the world of GMOs. For the first time, genetically modified animals are now approved for human consumption after the FDA gave them the stamp of approval as “safe”.

Genetically modified agriculture has been a growing mainstay on the dinner table despite an overwhelming majority with the opinion they should be labelled.

Now we have the added burden of identifying if the fish we are buying is PATENTED, without the aid of a label! As in, someone or some business actually owns the genetic code of a fish.

What in the world?

I’m concerned about the precedent this creates with all the current genetically modified animals that are currently in development.

What do you think?
Leave your comments below and let’s help spread the word, perhaps we can help trigger some positive changes if enough people find out about what is going on here.

The approval by the Food and Drug Administration caps a long struggle for AquaBounty Technologies, the small company that first applied for approval in the 1990s. The agency made its initial determination that the fish would be safe to eat and for the environment more than five years ago.

The approval of the salmon has been fiercely opposed by some consumer and environmental groups, which have argued that the safety studies were inadequate and that wild salmon populations might be affected if the genetically engineered fish were to escape into the oceans and rivers.

Within hours of the agency’s decision, one consumer advocacy group, the Center for Food Safety, said it and other organizations would file a lawsuit to try to rescind the approval.

“This unfortunate, historic decision disregards the vast majority of consumers, many independent scientists, numerous members of Congress and salmon growers around the world, who have voiced strong opposition,” Wenonah Hauter, executive director of the group Food and Water Watch, said in a statement Thursday.

The AquAdvantage salmon, as it is known, is an Atlantic salmon that has been genetically modified so that it grows to market size faster than a conventionally farmed salmon.

“The F.D.A. has thoroughly analyzed and evaluated the data and information submitted by AquaBounty regarding the AquAdvantage salmon and determined that they have met the regulatory requirements for approval, including that food from the fish is safe to eat,” Bernadette Dunham, director of the agency’s Center for Veterinary Medicine, said in a statement.

F.D.A. officials said Thursday that the process took so long because it was the first approval of its kind. People involved in the application suspect the Obama administration delayed approval because it was wary of a political backlash.

Ronald Stotish, the chief executive of AquaBounty, which is majority owned by Intrexon Corporation, said he was delighted and somewhat surprised by the approval after all this time.

“We have been in this process for a very long time, working constructively and patiently wait for approval,’’ he said in an interview. “Now, we are ready to get on with our business.’’

However, Mr. Stotish declined to say what the plans were for bringing the fish to market, other than that the salmon would not be in stores immediately because it would take about two years for even these fast-growing salmon to reach market size. It is also not likely there will be much of the salmon on the market because the approved production facilities, which are in Panama, has the capacity to produce only about 100 tons of fish a year, a tiny amount compared with the roughly 300,000 tons of Atlantic salmon the United States imports each year, he said.

Mr. Stotish said he did not know if approval was still needed from Panama to export the fish. “I have not asked that question, but I will, now that I have U.S. approval,’’ he said.

It is not clear how well the salmon will sell. Some leading supermarkets have already said, in response to environmentalists, that they have no plans to sell the salmon.

The F.D.A. does not require labels for genetically engineered foods. If genetic engineering results in a material change in a food — such as altering its nutrient content — the altered nutrition would be mentioned on the label, but not the fact that genetic engineering was used. In the case of the salmon, agency officials said, there were no meaningful differences between the engineered salmon and its conventional counterpart.

Certain consumer groups and organic food companies have been seeking in Washington and in state legislatures to require labeling of genetically engineered foods, and the approval of the salmon could galvanize their efforts. In addition to its draft guidance for voluntarily labeling salmon, the F.D.A. on Thursday released final guidance, years in the making, for how to voluntarily label food as to whether it was made from genetically engineered crops.

The fish are supposed to be raised inland, in contained tanks, to lessen the chances that they will escape into the wild. AquaBounty says this will also be less stressful on the environment than using pens in the ocean. And it could eventually allow the fish to be raised in the United States, rather than being imported, as most farmed Atlantic salmon is. Mr. Stotish has said in the past that organizations in the United States were interested in doing so.

For now, however, the fish are being raised in Panama, from eggs produced in Prince Edward Island, Canada. Approval to breed or raise the salmon elsewhere, for marketing to Americans, would require separate approvals.

Mr. Stotish said AquaBounty had applied for approval to market the salmon in Canada and Panama and would consider trying to sell it in other countries as well.

The approval could help other efforts to develop genetically modified animals. Scientists and biotechnology industry executives have complained that the long, unexplained delay in approving the salmon was a deterrent to the field. Several other attempts to develop genetically engineered animals for consumption, like a pig whose manure would be less polluting, have fallen by the wayside.

Now, however, there has been a surge of interest in developing new genetically altered farm animals and pets because new techniques, including one known as Crispr-Cas9, allow scientists to edit animal genomes rather than add genes from other species. That has made it far easier to create altered animals.

Scientists in China, for instance, recently created goats with more muscle and longer hair. Researchers in Scotland used gene editing to create pigs resistant to African swine fever. It is not clear yet whether animals created this way would even fall under F.D.A. regulation.

The AquAdvantage salmon contains a growth hormone gene from the chinook salmon and a genetic switch from the ocean pout, an eel-like creature, that keeps the transplanted gene continuously active, whereas the salmon’s own growth hormone gene is active only parts of the year. The company has said the fish can grow to market weight in as little as half the time of a conventionally farmed salmon.

Opponents of the fish say that if the bigger fish were to escape, they could outcompete wild salmon for food or mates. Other scientists have dismissed these concerns. The F.D.A. said on Thursday that there were multiple physical barriers in the Canada and Panama facilities to prevent this. The salmon are also made sterile to prevent reproduction in the event they do escape, although the sterilization technique is not foolproof.

AquaBounty first applied for approval of the salmon in the 1990s, but it took years to determine what data would be needed and how the salmon would be regulated. In 2010, the F.D.A. tentatively concluded the fish would be safe for people and the environment. In September of that year, an advisory committee found some fault with the F.D.A.’s analysis but did not in general challenge the overall conclusions. Then in December 2012, the F.D.A. released a draft environmental assessment that also concluded that salmon would pose little risk to the environment.

The F.D.A. regulates genetically engineered animals as veterinary drugs, using the argument that the gene inserted into the animal meets the definition of a drug. Critics have branded this an inadequate solution intended to squeeze a new technology into an old regulatory framework. They say the F.D.A. is not as qualified as other government agencies to do environmental assessments. The White House is now reviewing the entire framework for regulating genetically engineered products.

The F.D.A. said that to approve the salmon, it determined that the fish was safe to eat, that the inserted genetic elements did not harm the fish itself, and that the company had adequately proved that the salmon grew faster.

AquaBounty, which is based in Maynard, Mass., has long struggled to raise enough money to stay in business. It is now majority owned by Intrexon, a company started by the biotechnology entrepreneur Randal J. Kirk to pursue synthetic biology, a term for sophisticated genetic engineering.

Intrexon has also acquired the company that developed a recently approved genetically modified apple resistant to browning and a British company working on genetically modified insects, such as mosquitoes that might be tested in the Florida Keys as a way to prevent dengue fever. Shares of Intexon were up 7 percent early Thursday afternoon.