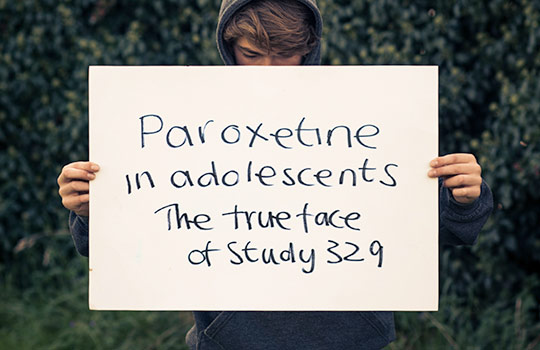 Toronto (September 16, 2015) — Today the BMJ published Restoring Study 329,* a decade-long effort by researchers to uncover the truth about the safety of an antidepressant approved for use by adolescents.

Restoring Study 329 is a reanalysis and rebuttal of the original Study 329, a randomized, controlled trial published in 2001 of the efficacy and harms of paroxetine (known as Paxil in the US) and imipramine in the treatment of adolescent major depression, which concluded that “paroxetine is generally well tolerated and effective for major depression in adolescents.”

Using the same data 14 years later, Restoring Study 329 comes to exactly the opposite conclusion, namely that “Neither paroxetine nor high-dose imipramine demonstrated efficacy for major depression in adolescents, and there was an increase in harms with both drugs.”

Although the FDA has issued several black box warnings about SSRI suicidality in the years following the original study, many thousands of children and adolescents have been harmed, some of them killed, by Paxil and other SSRIs. Global sales of these drugs have increased dramatically, including for pediatric and adolescent patients.

Dr. David Healy, one of the authors of Restoring Study 329, says this effort shows that “in the absence of access to primary data, published conclusions about efficacy and safety should not be read as authoritative. Too much reliance is placed on selectively published clinical trial data and not enough on observation and common sense. This reanalysis illustrates the necessity of having primary trial data available for all drug trials. There are too many drugs being marketed and prescribed which simply do not justify the associated risks.”

Notionally authored by Dr. Martin Keller, et. al., but actually ghostwritten by Sally Laden, the original Study 329 was published in the Journal of the American Academy of Child and Adolescent Psychiatry (JAACAP) in July 2001.

Based on this research, GlaxoSmithKline (GSK) marketed Paxil as safe and effective for adolescents when company executives were aware that a number of studies (all but Study 329 unpublished) had shown that the drug was no better than placebo and caused thought disturbance and suicidal behavior in some youngsters.

Paxil rose to be GSK’s bestselling drug and became the #1 antidepressant in the United States, with sales of $340 million by the end of 2001. It was one of a number of drugs in the SSRI class, and prescriptions of these drugs to children and adolescents continued to increase throughout the decade.

Almost immediately, a number of journalists and researchers spotted anomalies in Study 329’s data classification and interpretation and raised concerns with the authors, their institutions, and the JAACAP. Despite this, the clinical trial continued to be presented as a “landmark” study demonstrating the drug’s efficacy and safety.

In 2004 New York Attorney General Elliot Spitzer filed a consumer fraud action against GSK for mismatches between its marketing claims and the data. This lawsuit was settled for $2.5 million. The terms of the settlement included a requirement for GSK to post study results on its website, including those for Study 329. Access to original trial data was difficult for researchers, however, due to different interpretations of what should be included in “data” and what constitutes “access.”

In 2012 the Department of Justice brought an action against GSK in US District Court for causing the submission of false or fraudulent claims to Medicare and Medicaid. The company pleaded guilty and agreed to pay $3 billion — the biggest fine in corporate history.

In 2014, after years of dogged wrangling — in the courts, in the press, and in the scientific community — a group of researchers finally gained access to GSK’s study data, albeit through an unnecessarily cumbersome process that presented significant challenges to analysis.

Still, the researchers were able to determine from a detailed review of 77,000 pages of redacted patient data (which they were only allowed to view through a remote access portal from which they could not print or download) that suicide attempts were significantly higher than what the original study had reported and that there were many other unreported serious adverse events in the Paxil group. They noted that the drug was no more effective than placebo for alleviating depression in young people.

Dr. Healy says he believes that the issues uncovered are bigger that what happened with Study 329. “This was not an anomaly, but rather what has become standard industry practice for branded medicines. It raises many questions about drug safety, the limitations of randomized controlled trials, the need for access to individual patient level data, and the question of how to reduce harms from misleading health information.”

Fellow author Dr. Jon Jureidini says, “Our reanalysis of Study 329 reveals that drug regulators, pharmaceutical companies, senior ‘independent’ researchers, and journal editors are all failing patients. The core problem is that the process for safety and effectiveness testing is left to drug manufacturers, who have a vested interest in seeing positive results without the medical and scientific community being able to scrutinize what they are doing.”